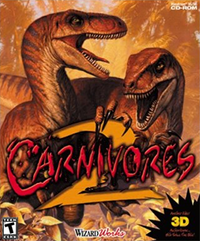 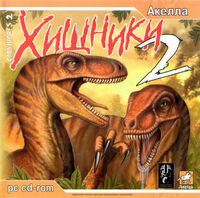 Carnivores 2 (published in Russian under the name Хищники 2 by Акелла, also called Carnivores II, and frequently shortened to Carn2 or C2) is the sequel to Carnivores, and the second game in the Carnivores series. Its storyline is almost identical to Carnivores', and the game gives the impression that DinoHunt Corp. has found new areas and dinosaurs and built new technology.

The gameplay of the original Carnivores remains constant throughout the series, with few changes. The game opens with a login screen, where users can make a new account or load a previous one. If creating a new account, they will be asked to read and approve a "waiver", stating that the player releases DinoHunt Corp. of responsibility in case the player is injured or killed (an interesting sidenote is that the player can't really be injured in any of the games - the closest the player can come is by staying underwater or walking through lava, in which a health bar pops up; when attacked by dinosaurs, however, any hit is instant death).

If accepted, the game proceeds to the main menu; declining exits the game. From the main menu, the player can view their hunting statistics, enter a hunt, view their trophies in the trophy room, change game settings, view the game's credits, or exit the game. In the hunt screen, you must pick a location, an animal to hunt, a weapon, and optional equipment. Choosing any equipment decreases the total amount of points you can get on any hunt by a set percentage, except for the tranquilizer, which increases the amount of points obtained. Information on each item is provided.

The player starts with 100 points which are depleted as the player selects an area and one or more dinosaurs and weapons. In addition, the player may choose what time of day to hunt, from dawn, day, or night. The only difference between each time of day is the atmosphere; carnivores, for instance, are just as active during the day as at any other time.

After the player has selected their settings, they can hunt. During the hunt, the player is provided with an on-screen compass and wind direction indicator, which can be activated and deactivated with the Caps key. Sometimes the player spawns near a huntable animal, which is bad if the animal is a carnivore. The player can also draw weapons (with the number keys), look at the area map (Tab ↹), or use the binoculars (B).

When a kill is made, the player's trophy is picked up by the dropship, unless tranquilizer mode is used. If the player is killed, all points and trophies earned in that hunt are lost. The player can choose to exit the hunt or respawn on the map anytime by pressing Esc+Y or Esc+R, respectively. If the player dies, he must choose to either exit or respawn. The player can be killed by drowning, burning in lava, or by being attacked, but not by falling (regardless of the height), so climbing mountains is an often-used strategy when hunting carnivores.

Carnivores 2 features a number of cheats, including all those provided in Carnivores. Cheats which are inherited from Carnivores require debug mode to be active.

The gaming websites IGN and GameSpot both gave Carnivores 2 ratings of 7.4 out of 10.

Carnivores 2 was ported to the iPhone under the title Carnivores: Dinosaur Hunter. The game features all of the same aspects of Carnivores 2 except for a necessary change in controls and a HUD change. It also features a new mode known as Survival Mode. In this mode you are required to shoot waves of dinosaurs that charge at you.