Coelophysis were small pack-hunting dinosaurs featured in Carnivores Cityscape and are a dinosaur in Carnivores: Dinosaur Hunter. They were among the first dinosaurs to evolve, appearing in the Late Triassic period, roughly 210–200 million years ago. Although similar to Compsognathus or Procompsognathus in appearance, it is a bit bigger. Coelophysis is unique among the other dinosaurs of FMM-UV32 in that it displays coordinated pack behavior, appearing in groups of up to 8 and using flanking tactics when attacking the hunter.

Coelophysis is the most abundant and frequently encountered dinosaur in the agent campaign. They often swarm the agent, with the swarms increasing in size as the game progresses. They are the fastest dinosaur, but are also the weakest; most weapons can take them down in a few shots. 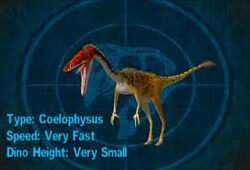 The Grenade Launcher and X-Rifle are very effective against them due to splash damage. Killing one with a direct hit and killing or severely wounding those nearby.

In the dinosaur campaign, this is the first and one of the most frequently played dinosaurs. Its small size and speed can make short work of lone agents, killing them with two or three slashes, though Coelophysis can have trouble if surrounded by agents.

Like Utahraptor, Carnotaurus, Indricotherium, Hyaenodon, and Iguanodon, and others, Coelophysis was announced on the official Facebook page on Febuary 26, 2014 by Tatem Games; they stated that they were adding a new dinosaur in addition to Iguanodon.[1] The Coelophysis was released in April 18, 2014 as well as the Iguanodon. Its color scheme strongly resembles that of the Coelophysis from BBC's Walking with Dinosaurs.

Coelophysis is a pack hunter, and appears on the map as several dots mingling together. When the hunter approaches, they swarm towards him. Having relatively weak health, one may manage to hold his ground and take them out, but it is recommended to either attain higher ground or retreat, as Coelophysis do not "swerve" as most dinosaurs do, they simply charge right towards you, as a group. Coelophysis also have the distinction of being very noisy and loud; allowing the hunter to hear them a great distance away. Even though the coelophysisis a pack hunter occasionaly one will spawn on it's own.

When hunting on a map full of Coelophysis, it is noted that if the hunter shoots a loud weapon, causing the pack to run a short distance and then send the majority of individuals back to attack, and then the hunter relocates away, the dinosaurs will hunt down the player even on the other side of the map. Thus, with repeated relocating, a player can mass a swarm of over 30 Coelophysis to one spot. Coelophysis will flee and come back.

With the Coelophysis being the first pack dinosaur, it's AI is different from other dinosaurs.

When a hunter locates a pack and fires a weapon at, or anywhere, the dinosaurs closest to him/her will run towards the player. By aiming at the side of the animal; a few 1 hit will bring down each animal.

The dinosaurs that aren't in "attack mode range" will flee and regroup elsewhere. If none of the pack is in the attack range, the entire pack will move a short distance away. Then, no matter where the hunter is, on one side of the map or the other, several individuals from that pack will hunt the hunter down until killed, or they kill the player.

This means that by taking select individuals from each pack, a careful hunter can amass a gigantic swarm, gun them down safely and take a picture for the record books.

Retrieved from "https://carnivores.fandom.com/wiki/Coelophysis?oldid=12772"
Community content is available under CC-BY-SA unless otherwise noted.