The X-Rifle is an explosive weapon in Carnivores Cityscape. Like the other available guns in the game, the X-Rifle is futuristically built. What sets it apart from the others are the large, blue energy blasts it fires instead of conventional ammunition.

It is described as an experimental weapon, and can decimate small clusters of Coelophysis or Oviraptor. However, it is best used at medium range, as the shockwave the energy sphere creates upon impact can inflict damage upon the agent firing it, similar to the Grenade Launcher. There are 40 shots in the X-Rifle.

interestingly, in the game files, the texture and model are named "X_Bow". 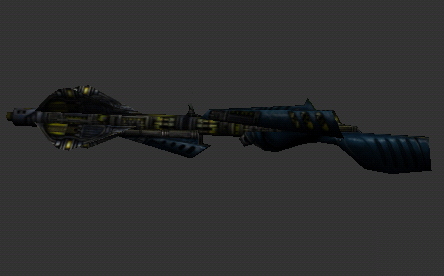 Retrieved from "https://carnivores.fandom.com/wiki/X-Rifle?oldid=11341"
Community content is available under CC-BY-SA unless otherwise noted.